Our people, mission and values 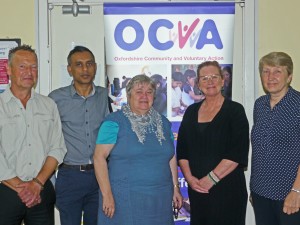 Appointed 1 September 2008. He has an MA in Jurisprudence from Worcester College Oxford. He was called to the Bar in 1971 and is a member of the Inner Temple. He received the OBE in 2004. Chief Executive of Castrol International 1993-1998; Chief Executive of Burmah Castrol PLC 1998-2000. Chairman of Travis Perkins PLC from 2001-2010 and Chairman of Morgan Crucible PLC 2006-2012. He is currently Chairman of Johnson Matthey PLC. Chair of Governors of Oxford Brookes University 2004-2008. Member of Council at Modern Art Oxford 1998-2004. Interests: hill walking, music and reading.

Colin Fletcher began his ministry in 1975 as Curate at St Peter’s, Shipley, a large suburban church in the Bradford diocese. In 1979 he became Tutor in Ethics and Early Church History at Wycliffe Hall, Oxford, and Curate of St Andrew’s in North Oxford. From June 1984 he was Vicar of Holy Trinity, Margate, and from 1989 to 1993 also Rural Dean of Thanet.

In 1993 Colin was appointed Chaplain to the Archbishop of Canterbury, and in October 2000 he became Bishop of Dorchester. His work involves him in supporting about 200 churches in Oxfordshire. In addition he has strong links with a variety of groups, such as Creation Theatre Company, Oxford Inspires and Bible Reading Fellowship. He is Chairman of the County-wide Stronger Communities Alliance. Nationally he has a remit for the Church of England in connection with chaplaincy in detention/removal centres and also with the police.

Timothy Hallchurch was trained at Sandhurst and served for many years in the Army in Royal Signals and served Aden, Cyprus, Libya, Rhodesia/Zimbabwe, Northern Ireland, Germany, Jordan, the Maldives and organised and ran long range communications during the Falklands conflict. He later worked in the defence industry and commanded the Queen’s Own Oxfordshire Hussars as a TA officer and was also Military Liaison Officer for Oxfordshire as an acting Lieutenant Colonel. He is also a Cherwell District Councillor and was Chairman of Cherwell District Council for the year 2011-12.

Enabling a diverse voluntary and community sector to flourish in Oxfordshire. We do this by providing advice, information and training, acting as advocates and representatives, and building partnerships.

As an organisation and as individuals we value:
Equality
We will work within an equal opportunities policy which is regularly reviewed. We will respect the rights, views and needs of others.
Professionalism
We will be effective and reliable in our service delivery, partnership working, and relationships with funders.
Empowerment
We will enable others to take responsibility for identifying and achieving their own objectives. We will support the take up of our services by individuals and groups from a diverse range of backgrounds, including the most disadvantaged.
Flexibility
We will respond to a constantly changing environment with energy and creativity, in order to influence the future of our sector.
Collaboration
We encourage working together to build strength and sustainability in the sector.

See Oxfordshire Community Foundation about funding, Charity Mentors about strategic support and advice, and Community First Oxfordshire for community support, services and place-making.
Partners may also be able to help, including the safeguarding children board.

Our Partners, People, Mission, and Values

Funded and supported by:

Our 14 sponsors of the  Charity Awards